KPN, Vodafone, T-Mobile and Tele2 have all rolled out their 4G networks, and while consumers are increasingly adopting 4G services and using more data over the networks, this has not led to any less use of Wi-Fi services. On the contrary, a third of Dutch consumers are using Wi-Fi more often since they have access to 4G, according to research by the Telecompaper Consumer Panel. 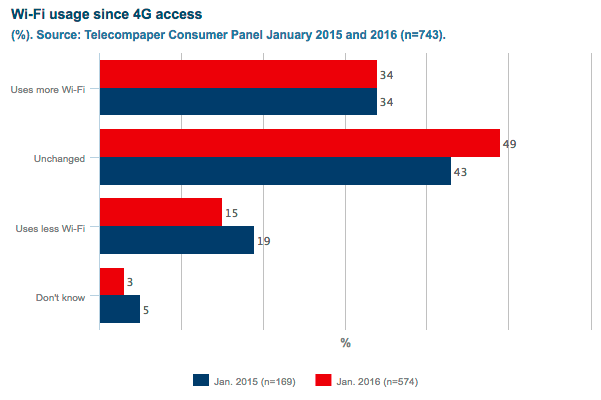 Men (37%) were more likely to say they use more Wi-Fi than women (29%) since gaining access to 4G. The age group 20-29 also indicated increased Wi-Fi usage, at 39 percent compared to a market average of 24 percent.

Compared to the same survey a year ago, there was little change in the responses. In January 2015, 34 percent also said they used Wi-Fi more since gaining access to 4G, while 43 percent saw no change in their Wi-Fi usage and 19 percent used Wi-Fi less.

Since the previous survey, 4G access has become more widespread. KPN, Vodafone and T-Mobile have all completed their network roll-outs, and Tele2 is nearly finished. The operators are also upgrading speeds with LTE-Advanced and launching voice over LTE. More and more consumers also have 4G phones and are increasing their data usage.

Despite the growing penetration of 4G, Wi-Fi usage is not letting up. A possible explanation is that the faster 4G connections stimulate mobile internet use, driving consumers to connect more often, also over Wi-Fi. 4G also uses up data allowances faster, causing consumers to turn to Wi-Fi more to avoid overspending. Unlimited mobile data plans are no longer available in the Netherlands.

The faster 4G networks are used often for watching videos and streaming music, which consume a significant amount of data. A quarter of the 4G users (24%) said they watch videos more, for example over YouTube or Facebook, than when they were on 3G. Only 4 percent said they watch less video on 4G. 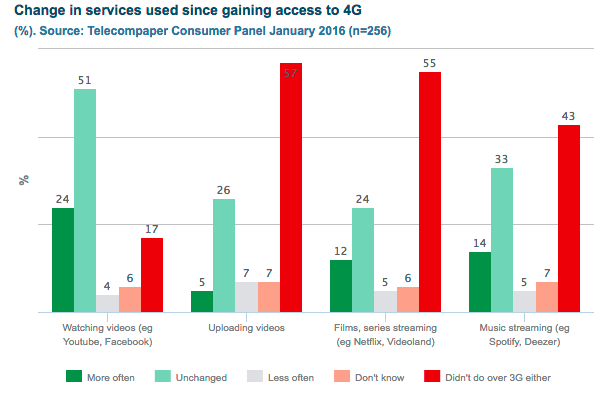 Fourteen percent said they stream music more since having 4G instead of 3G. Other research by Telecompaper shows that almost half smartphone users have a music app installed on their phone.

Only 12 percent of 4G users said they are streaming films or TV series more, while twice as many said their streaming had not changed since they started using 4G. Five percent said they even stream video less since getting 4G. A majority (57%) still don’t stream movies or TV programmes over the mobile network, even though they have 4G.

This research is based on the Telecompaper Consumer Panel. The survey was conducted in January 2016 (n=574) and January 2015 (n=169). Panel participants were asked the questions: “Do you use Wi-Fi more, less or the same since you have access to a 4G network?” and “Do you do the following activities more, less or the same over mobile internet since you have 4G access?”. Panel participants are aged 12-80, and results are stratified according to age, gender and education. For more information about research opportunities with the panel, please contact research@telecompaper.com.