from: The Atlantic/ Citylab, by Karen Loew 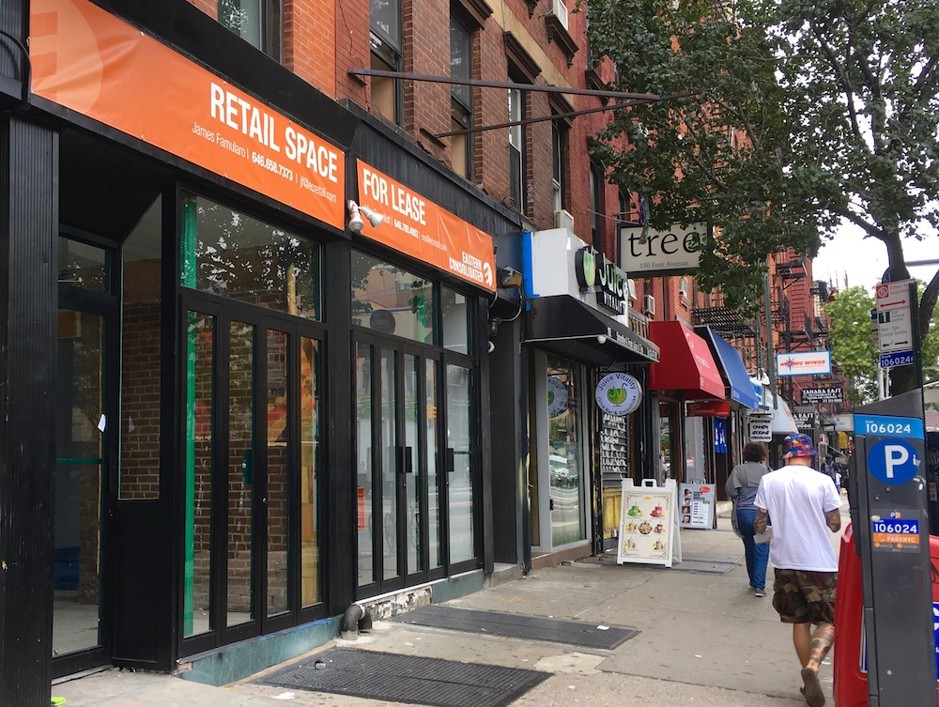 This space on First Avenue has been vacant for months.

Some places are already taking action, but New York City is lagging behind. Here’s a blueprint for keeping local retail healthy.

Over its two decades in business, Jane’s Exchange, a secondhand children’s and maternity clothing shop in Manhattan’s East Village, has clothed generations of diverse New Yorkers and served as a de facto resource center, water cooler, and play spot. When she’s not running Jane’s Exchange, the co-owner Gayle Raskin, who also lives nearby, is usually active elsewhere in the community.Especially on this island of the empty storefront, her shop is a textbook example of why shopping local matters: The store fills a need, employs local residents, re-invests locally, supplies warmth and personality to a city block, and supports neighborhood connections and institutions, which support it back.Shops like this one are disappearing fast from city streets, particularly in Manhattan, where they’re often left empty—leading to so-called high-rent blight—or else replaced by chain stores. According to the Small Business Congress, at least 1,200 small businesses close every month in New York City. Even if that number is correct, some are replaced by new small businesses. But the immense scale of the problem is clear: “This is the number one issue in Manhattan,” Borough President Gale Brewer told the City Council at a hearing last September. At that hearing, councilmembers members upbraided city officials for not gathering data on a scale commensurate with the problem.

Meanwhile, cities around the U.S. and the world are recognizing the value of homegrown retail and are enacting policies to enrich the frequently poor soil where small businesses attempt to grow. That’s because municipal leaders are realizing that the basis of any community is its sense of place—its singular look and feel, roots and aspirations—and local retail is essential to expressing that. Shops are part of culture—in addition, of course, to being the places where you can fix a shoe, find a dress, buy a coffee, and chit-chat.The toolbox of local shop-saving solutions is expanding, even at this moment when we don’t know what shopping will become in the face of online commerce. San Francisco, for example, has for some time only permitted chain stores on a case-by-case basis. Phoenix is banned from giving large retailers tax and other incentives. Palm Beach, Florida, created a Town-Serving Zone, and Fort Collins, Colorado, declared a development moratorium in order to more sensibly handle a rush of chain stores wanting to locate there. Seattle is working to launch a program to support historic businesses. (There’s a long history here: Before the Great Depression, the U.S. charged an extra tax on chain stores.) 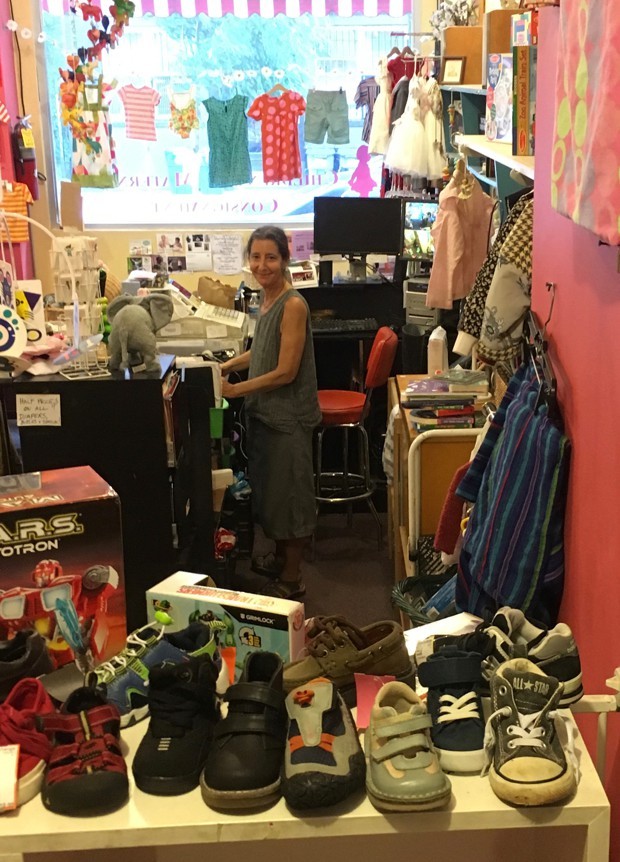 This is the moment for mom-and-pop shops to assert their value proposition, says Olivia LaVecchia, a research associate at the Institute for Local Self-Reliance in Washington, D.C. “There’s really a failure to recognize what a powerhouse small businesses are,” says LaVecchia, citing their interdependency with other desirable local outcomes, such as maintenance of affordable housing and jobs.
A recent report from ILSR advocates six policy approaches that any locality can apply. These ideas lend themselves to being customized. After a raft of tavern closures in England, a new process was born to dub locals Assets of Community Value that could follow a path to business preservation. Now the Ivy House is thriving as the first cooperatively owned pub in London. In the Latin Quarter of Paris, when too many bookstores closed, and too many tourists thronged, the city’s Vital Quartier program was born to combat “blandification” and promote the tenancy of culturally significant organizations. From Barcelona to Buenos Aires, cities are demonstrating that local retail culture matters.But in New York City? “Crickets,” as Kirsten Theodos would say. She’s the passionate coordinator of Take Back NYC, which advocates for passage of the Small Business Jobs Survival Act, or SBJSA, the only measure to directly address the matter of rent rates and lease renewal, which is what proprietors will tell you is their number-one problem.

But the sound of silence in New York is starting to change. There are many ideas circulating from various politicians and groups—even more now than two years ago, when I optimistically wrote a roundup of proposals for my former job in East Village preservation (and came to know some of the people cited in this article). A proposal under consideration by Community Board 3 in downtown Manhattan would create a special zoning district in the East Village aimed at limiting the number of new chain stores and banks. A recent rally in favor of the special zoning district was held in front of a Starbucks under construction on Tompkins Square Park, one block from where the popular Café Pick-Me-Up was reportedly driven out by landlord demands. A candidate for mayor and a candidate for public advocate are both making small business a central campaign topic.

But that’s just the thing: So much is always on the brink of happening.

While Gotham talks, Jersey City, directly across the Hudson River, acts. Its city leadership just voted to reaffirm a similar “formula retail” provision capping how much of its downtown street-level retail can be chain stores.

Small business advocates say the reason for inaction, in this case, is that Mayor Bill de Blasio and the most powerful councilmembers simply have no desire to touch the third-rail topic of commercial rents when the Real Estate Board of New York is one of the most reliable sources of campaign cash. A REBNY rep was one of the four people to speak against the proposed special district in the East Village, among several dozen emphatically in favor, at a June hearing on the matter, held by Community Board 3. As State Senator Brad Hoylman, a Democrat who represents much of the East and West Village, delicately put it to me in an interview last month: “The truth is at the local level, and state level, the real estate community is very influential. It’s up to constituents and tenant advocates and small business owners to push back on that.”

This May, Hoylman released a report documenting the empty state of storefronts on Bleecker Street, which was a shopping destination a decade ago. He says he was promptly contacted by a number of people in the real estate industry with input to give. He plans to hear from them, but says that he stands by his policy recommendations, which if taken together would form the kind of robust, multi-pronged strategy that has succeeded in San Francisco, where it kept mom-and-pop stores a visible part of the city’s fabric. The plan includes support for the SBJSA; “formula retail zoning” that allows chain stores only by permit, not by right; disincentives to landlords for keeping spaces empty, plus incentives for filling them, even with temporary uses; fairer taxation; new data collection; and creation of a Legacy Business Registry like that in San Francisco, which helps to raise the profile of historic old restaurants and shops (and in SF, to direct some money to them as well).

Manhattan Borough President Gale Brewer, too, promotes a packageof policy fixes, with the notable addition of “condo-izing” storefronts, so that shop owners can have more control over their business, without having to buy an entire building. Like Hoylman downtown, her staff counted empty storefronts uptown, finding a similarly sad situation. At that City Council hearing in September, the city’s reps from City Planning and Small Business Services (SBS) made it clear that they had no real data on small business numbers, or plans to gather any.

That lack of direction from the top is why our streets look and feel the way they do. Sure, there are a handful of smaller government programs, whether a retail set-aside in Harlem or a Love Your Local campaign across the city. But a place determined to keep its retail culture must approach it holistically, and with teeth, as San Francisco has, or as Hoylman points toward.

Back at Jane’s Exchange, Raskin herself acknowledges that if her children were toddlers today, Amazon would be mighty appealing. Chain stores can be useful, and online shopping can be convenient. But what NYC’s small business advocates want to see is an environment in which successful small businesses can stay open—and new businesses can have the time to become successful. There are ways to do it. What New York City leaders need now is will.