Nowadays, business travelers want to hop on the Internet quickly, whether it’s for work or to stream their favorite TV shows at the end of a long day. And hotels have gotten the message, investing heavily in the infrastructure that’s necessary to make it happen.

A new report released by NYU’s School of Professional Studies projects that the U.S. lodging industry will spend a record $6.4 billion on capital expenditures this year, and upgrading Internet service is often one of the top priorities.

“It is one of the more common capital expenditures,” says Bjorn Hanson, the NYU clinical professor who authored the study, adding that the typical amount spent by a hotel to improve Internet service is $40,000.

And while some hotels, particularly more expensive, luxury properties, tend to charge for Internet access, the upgrades taking place throughout the industry are not about fees but keeping customers happy.

“The investment has been more about customer satisfaction than any enhancing of revenue,” Hanson says. “Whether people are paying for it or not, if they can’t get access or keep getting bounced off, it’s a ‘dissatisfier.’”

At Starwood, more than 50% of guests were connecting to hotel Wi-Fi as of 2014, and up to 75% of the devices being used to tap into the Internet are mobile.

To meet the demand, the company has boosted standards for its hotels each of the past three years to make Wi-Fi offerings more robust. Its properties are augmenting or replacing Wi-Fi equipment and working with their ISPs to expand bandwith. Starwood is also requiring all of its hotels to bring in independent third parties to conduct surveys and confirm that the property’s Wi-Fi adheres to Starwood’s requirements.

Hilton Hotels have also been boosting their Wi-Fi technology. “Wi-Fi is the most widely used on-property amenity according to our customer satisfaction data,‘’ says Jim Holthouser, executive vice president, global brands, Hilton Worldwide. “We give guests the ability to choose how they want to connect during their stay and we’ve built the infrastructure to provide an easy and consistent online experience at our hotels globally.”

At some hotels, complimentary Wi-Fi is offered as a perk to the most loyal guests.

For instance, though certain hotel families under the Starwood brand, like Element andSt. Regis, offer free Internet access to all guests, and all hotels have certain spaces that are free hot spots, other properties within the Starwood family provide complimentary access specifically to members of Starwood’s loyalty program who book directly through hotel channels.

Similarly, members of Hilton HHonors, the brand’s loyalty program, who reserve a room through Hilton or associated channels, get complimentary Wi-Fi at Hilton hotels worldwide.“Guests may choose between two different Internet speeds,” Holthouser says, “standard Internet access, suitable for those guests looking to send emails or browse the Web, and premium access, which provides faster speeds to stream video or enjoy other bandwidth-intensive applications.’’

In the Marriott family of hotels, the JW Marriott Essex House in Manhattan has seen the benefits of its Internet investment firsthand.

“When the opportunity to have streaming Netflix, Hulu, Crackle and Pandora arose earlier this year,”  says Kathleen Duffy, a spokeswoman for Marriott International, “the hotel was already in place with heightened bandwidth, allowing fast or even faster streaming than in one’s own home.”

But across the hotel sector, some business travelers say more has to be done.

“Most high-speed internet at hotels is really just medium-speed Internet, and it is getting slower as more devices access overworked infrastructure,” says Doug Houseman of Plymouth, Mich. A vice president of technical innovation and member of USA TODAY’s panel of Road Warriors, he added that “most hotels need to rethink the amount of bandwidth they have available. In 2000, it was fine. In 2015, not so much.”

A carrier technology that uses Wi-Fi frequencies to provide LTE connectivity could let the big wireless providers mess with your home connection and push you on to their networks, according to comments filed today with the FCC by several watchdog groups.

The technology is called either LTE – Unlicensed or Licensed Assisted Access (LTE-U or LAA), and it essentially works by using 4G/LTE radios to send and receive data via the same 5GHz frequencies as Wi-Fi. This lets carriers offload traffic from their congested licensed networks to consumer Wi-Fi, easing the load.

But there’s a catch, according to a coalition of public interest groups, including the Open Technology Institute, Public Knowledge, Free Press, and Common Cause. In their official comments to the FCC today, the group argued that unregulated use of LTE-U technology – which operates on the same frequencies as existing Wi-Fi – would allow America’s large wireless providers to degrade the functionality of existing home wireless networks, provisioned by landline cable or fiber services.

“Carriers deploying LTE-U will have the apparent option to adjust their access points to introduce just enough latency to frustrate consumer use of real-time applications, such as video calling,” the group’s filing said. “Moreover, mobile carriers deploying LTE-U and LAA operators will entirely avoid the ill-effects of any resulting poor coexistence on unlicensed bands, since they can shift their users and traffic at will to their exclusive, licensed spectrum.”

The group urged the FCC to seek more input from stakeholders beyond the carriers themselves, and to push for safeguards against anti-competitive behavior.

Sprint had no comment on the watchdog groups’ filing, while Verizon referred us to its own filing on the matter, which says such concerns are “misplaced” and argues strongly against any additional regulation for LTE-U technology. T-Mobile said that it is “working with standards bodies on protocols that allow LTE-U to coexist with Wi-Fi.” AT&T did not respond to a request for comment. 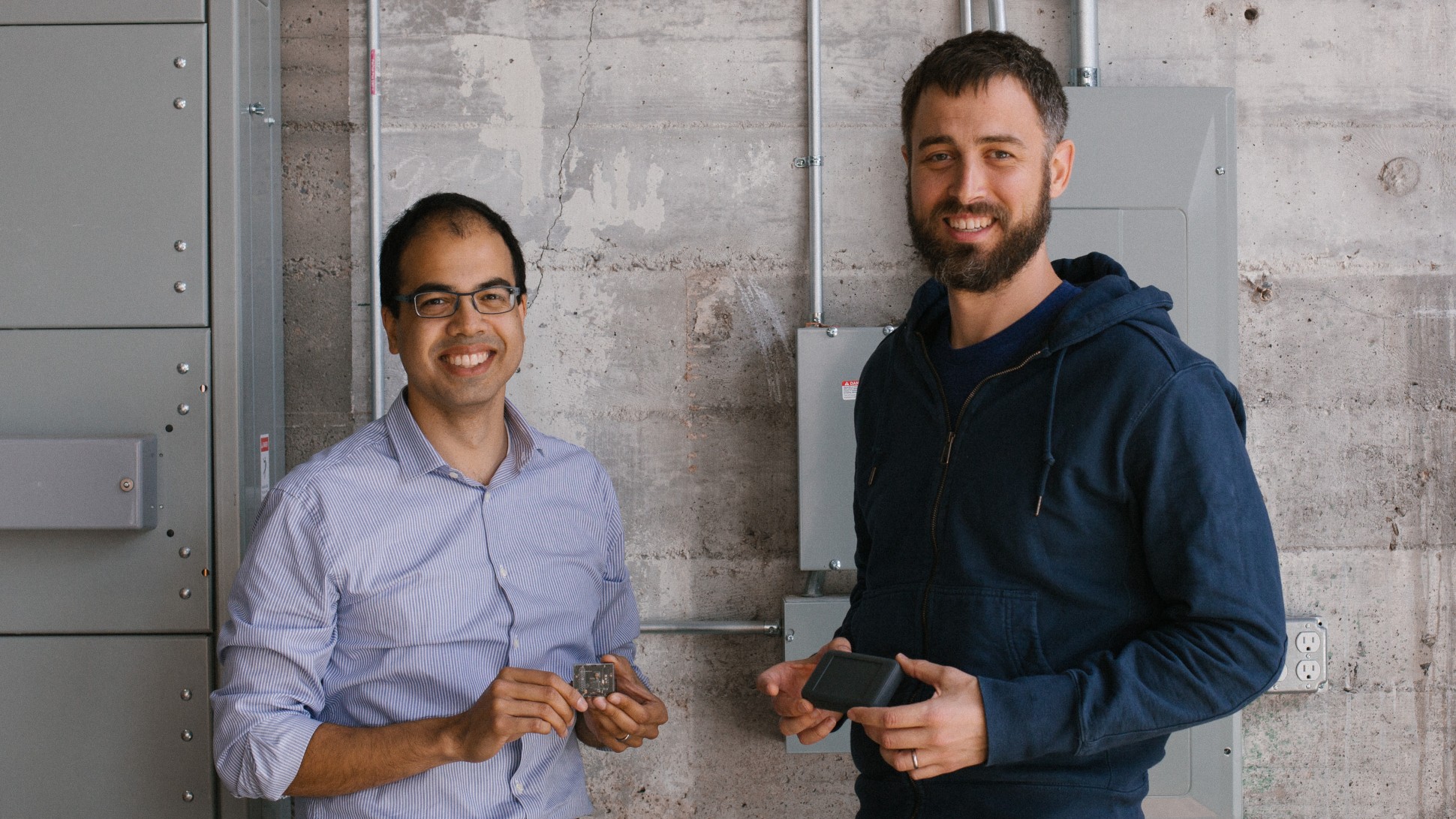 In 2006, two MIT grad students decided to turn their networking research into a startup called Meraki. Six years later, they sold it to Cisco for $1.2 billion. But when their time was up integrating Meraki into its new home, Sanjit Biswas and John Bicket decided to do something completely different.

The duo played around with drones and with tiny Raspberry Pi computers and smartphone chips. Eventually they realized the smaller and cheaper hardware going into those phones and wearable devices could be used for another purpose: industrial sensors.

“Whenever something shifts by a factor of ten, things really move around,” says Biswas. “This was already great for the consumer, but what about enterprise and industrial companies? None one had really been taking that approach.”

So Biswas and Bicket brought some of the old Meraki gang back together to work on new cloud-connected sensors for industry. When they formally launched their new startup, Samsara, early this year, they did so with a core team of a dozen technical staff already in place. And now as the company emerges from stealth mode, they have a big-name investor behind them, too: board member Marc Andreessen.

Andreessen Horowitz has invested $25 million into Samsara in a larger-than-usual Series A round. Andreessen, who was not an investor in Meraki, likes that the founders are bringing what worked with their previous company to a new, but not wholly unrelated, field. “The what of what they are doing is different, but the how is almost identical,” Andreessen says. “These guys have a special formula, and the playing field is bigger than it was for Meraki. There is no Cisco of industrial sensors. There is no 800-pound gorilla. So that playing field is wide open.”

Samsara raised so much money right off the bat because the challenge it’s tackling is an expensive one. Large systems like municipalities have assets like water tanks that are already checked by sensors, but they’re not hooked up to the Internet, Biswas says. And at other companies like big grocery store chains, quality control can be transformed if a sensor is tracking each pallet of eggs automatically each step of the way.

The incumbents, Samsara believes, haven’t dramatically improved their offerings in recent decades. Biswas is confident that the approach he and Bicket perfected at Meraki will allow them to move faster than those larger companies like Honeywell,Johnson Controls JCI -4.53% and GE. And at a large scale, Samsara hopes to connect your sensors for about $100,000, one-tenth the typical contract cost.

Andreessen sees Samsara as a company that can create a virtual replica of the industrial world from the data its sensors collect. Insights from that system could then dramatically change how logistics and operations are conducted, a “monster” opportunity for Samsara down the road. “A first time founder would not do this,” Andreessen says, noting that Samsara raised more than the typical Series A because it needs to solve for software, hardware and services for industrial clients all at once. “If you’ve exited a company for more than a billion dollars, you have a different conversation with VCs the next time around,” Andreessen says.

Biswas knows that he and Bicket have cut out a big challenge for themselves in an industry with slow sales cycles. But Samsara believes it has the talent and experience to overcome those pitfalls and recapture the Meraki magic for the sensor space. “You just have to outrun everyone,” Biswas says. “You can’t be just a little bit better. You have to be ten times better in some way, not 20% better than how the customer did business before.”